Language is, of course, how we communicate political ideas to each other. But what is not often realized is that the language we use can itself be political. Often on the face of it, the way in which our language is structured — the words themselves or their denotations — are seen to betray no political significance. To be trite and quote Orwell, “Underneath this lies the half-conscious belief that language is a natural growth and not an instrument which we shape for our own purposes.”

Many feminists criticize the traditional idea that language is a neutral vessel that merely depicts reality, because, like Orwell (who was markedly not a feminist), they see language as a powerful, and undeniably political, tool that can easily be weaponized. And not just in the form of political name calling to damage an individual opponent’s reputation, like labelling an opponent “crooked,” but also in the ways language actually shapes reality. For example, words like “caring” or “bitchy” are used more often to describe women than men, thereby embedding in our social consciousness the notion that these are specifically feminine traits — and traits that are undesirable in our political leaders.

Deborah Cameron, a professor of linguistics at Oxford University, writes that “… societies are characterised by the incessant production of messages, images, and signs. To understand society therefore entails learning how to ‘read’ its cultural codes, its languages” (Feminism and Linguistic Theory, 2nd ed., 1994). This can just as easily apply specifically to election campaigns. The American political system and its corresponding language from stump speeches to the Congressional floor is a realm designed of men, by men, and for men, and little has changed in that respect over the course of our 240-year history. The problem for women here is easy to see and captured nicely by Dee Dee Myers, Press Secretary during the Clinton Administration: “If male behavior is the norm, and women are always expected to act like men, we will never be as good at being men as men are.” Cameron goes on to assert that, “[language] is a powerful resource that the oppressor has appropriated, giving back only the shadow which women need to function in a patriarchal society. From this point of view it is crucial to reclaim [political] language for women.”

Democratic Presidential Candidate Hillary Clinton has proven herself adept at functioning within this masculine paradigm of politics, and can attribute most of her success today to that set of skills. She has worked incredibly hard at building a public persona that embodies the confidence and power we have come to expect and respect in male politicians. In fact, in a comprehensive survey of Clinton’s 30+ years in politics, Jennifer J. Jones, asserts that Clinton’s rhetoric has become more masculine as her career has progressed. Yet, because she is a woman, it is one of the things that make her extremely unpopular. What’s interesting, though, is that Clinton’s approval ratings seem to have a causal link with how often the public hears her speak. During election campaigns or high-profile congressional investigations, her ratings plummet, but they tend to recover to respectable mid-50s to 60s levels after her vocal presence in the public eye has diminished. When the ‘Texts from Hillary’ meme came out when she was Secretary of State, her ratings soared. This seems to reinforce the adage that women are meant to be seen and not heard.

The media, of course, is largely responsible for reinforcing, perpetuating, and even exacerbating this paradigm. After the third presidential debate, many major news outlets ran stories on Clinton’s choice to wear white (after Labor Day, gasp!). Others accused her of taking on her opponent’s pugnacious manner to use against him in that same debate. The media at once sees Clinton as a woman, and hence the sartorial commentary, but an unfeminine woman who can therefore be critiqued for being too masculine.

As a woman, Hillary Clinton is a fundamental and symbolic shock to the traditional political system. Clinton does not fit neatly into the media mold of what they expect from a woman. And although she emphasizes and instrumentalizes her gender in her campaign rhetoric, her ability and willingness to work within the male-centered system might be her biggest fault from a feminist point of view. At the risk of overgeneralizing, today’s feminism largely emphasizes structural injustices, and how the political system is fundamentally stacked against women (and other “groups” like people of color). Therefore, in order for women truly to be represented, we need a new kind of politics and a new kind of politician.

It’s no secret that Hillary Clinton is not the feminist hero we’ve all been looking for. Shattering a proverbial glass ceiling by becoming the first woman presidential nominee of a major political party will only get you so much street cred with today’s feminists. She is in no way reclaiming or subverting the system that so drastically needs to make space for women. While it may be a strategic choice bent on winning over a less-than-enthusiastic Democratic base, she is very much running as an establishment politician and, as such, is throwing away so much of her symbolic and revolutionary potential.

Public consensus now seems to be that women are just as capable of holding political office as men, but we still have trouble getting there in the first place. And the problem starts on the campaign trail. In running for office, candidates are put in the position of asking the electorate to give them power. Historically, for women, asking for power of any kind is not necessarily the most successful strategy. By tacitly agreeing to work within man’s political reality, Clinton is, we might say, capitulating with the patriarchy in assuming these traditional gender norms.

But this election cycle is far from typical, due largely to her opponent — who has proven himself to be a veritable fount of racist, xenophobic, and sexist rhetoric. At this critical juncture, when a woman is running against a walking embodiment of misogyny, perhaps critiquing Clinton for embodying the male-dominated conception of what means to be a politician is more damaging for women than it is helpful. 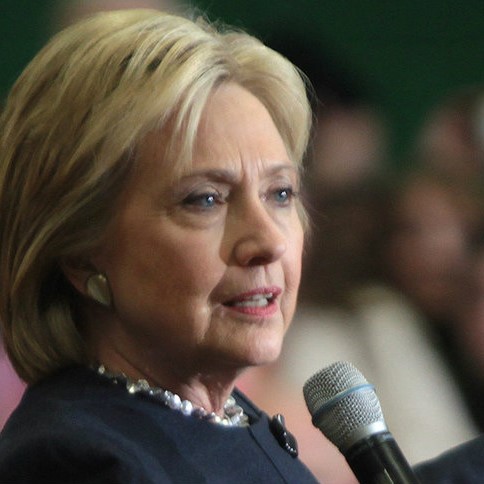